London Trading Standards is highlighting what it believes to be a major problem which results in letters sent to limited companies at their registered office address never being received by the intended recipients.

The problem has been identified during investment fraud disruption work carried out by Trading Standards in London. Such work brings it into close contact with businesses in the mail forwarding sector.

Limited liability companies are legally required to have a registered office in the UK. However, there is a thriving mail forwarding industry provided by Trust and Company Service Providers which allows limited companies to pick a ‘virtual’ registered office address that they can use.

Over the last few years this trend has resulted in some limited companies selecting which type of mail is actually forwarded to them.

For example some choose to only receive written communications from Government agencies such as HM Revenue & Customs and Companies House with everything else being ignored.

The problem was highlighted after important mail from one London Trading Standards authority was returned to sender despite being addressed to the legally registered office of a limited company.

As a result, legal opinion on the issue was obtained which has national implications for the mail forwarding sector in the UK.

The opinion states that companies choosing to only be sent official government mail are in breach of professional diligence provisions in unfair trading regulations. Such a breach is a criminal offence for which Directors and other company officers could be fined or imprisoned. Any Trust and Company Service Providers facilitating this practice could also be committing offences.

Steve Playle, a spokesperson for London Trading Standards said: “In these days of increasing commercial activity, via websites and social media platforms, it is still vital that consumers can effectively communicate in writing with businesses. This is particularly crucial when there are complaints or problems that need to be resolved. What we have found is that some limited companies are happy to be in a position to be uncontactable in writing and thereby frustrate any attempts to deal with anyone who needs to engage with them.

“The ability to write to a company is a fundamental requirement in any thriving economy and we want to ensure that it continues.”

Trading Standards authorities are now engaging with the mail forwarding sector across the UK to give them the opportunity to rectify their methods of operation. Limited companies are also being urged to ensure that they have proper arrangements in place to receive all mail that is addressed to their registered office 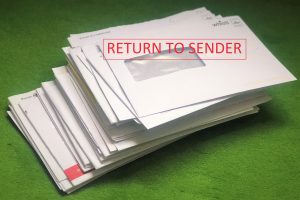