Shops are being urged to ‘ASSESS-CHALLENGE-CHECK’ the age of buyers on and offline, as part of an initiative to stop illegal, underage knife sales.

London Trading Standards (LTS), which represents 33 local authorities in London, is joined by the Deputy Mayor of London and the Metropolitan Police for the launch of the Responsible Retailer Agreement (RRA) on knife sales.

The RRA, which is accompanied by a good practice guide and a set of online retailer training animations, comes as new figures show that 160 knives were sold to volunteers as young as 13 last year in London boroughs’ trading standards test purchase operations, with 1 in 9 stores making an underage sale and 2 in 5 online retailers.

Sophie Linden, Deputy Mayor for Policing and Crime, said: “Knives have no place on the streets of London. It’s simply unacceptable that teenagers as young as 13 are able to buy knives – this is why it is vital that retailers comply with the law and stop knives from getting into the hands of young Londoners. “As part of the Mayor’s public health approach to reducing violence and tackling the causes of knife crime, we have been doing everything we can, together with the Metropolitan Police and London Trading Standards, to crack down on illegal knife sales to teenagers. This new support for smaller shops launched today will help ensure that all retailers are following best practice by helping to train staff on the storage and sale of knives and encouraging them to speak to the police if they have any concerns. Knife crime destroys communities and the only way we are going to rid our streets of these dangerous weapons is by working together to stop them getting into the hands of young people.”

London Councils’ Executive Member for Crime & Public Protection Cllr Jas Athwal, said: “Knife crime and youth violence represent a serious challenge to London. The Responsible Retailers Agreement is an important step forward. The government must now make sure London boroughs’ trading standards teams have the resources we need to carry out checks on retailers and help enforce the law.”

Commander Mark McEwan of the Metropolitan Police said: “Violent crime is our number one priority and this is a great example of the MPS collaborating with our partners to help address it. Prevention is key. These resources will help us to mobilise our partners in the business community to tackle the complex issue of knife crime. Over the next few months our officers will be working with Trading Standards staff across London to promote the training resources and get retailers to sign up to the Responsible Retailer Agreement. We urge businesses across London to sign up and play their part in preventing violent crime.”

Commissioner Ian Dyson of the City of London Police and National Police Chiefs’ Council lead for Business Crime, said: “As the NPCC lead for Business Crime I am delighted to launch the training animations. These have been designed in partnership with the business community and will be an invaluable tool for businesses across the UK. The resources, part funded by the National Business Crime Centre, are available free of charge on the NBCC website. They are applicable for all businesses who sell knives, from large national chains to small independent retailers. The resources explain how businesses can store, display and sell knives responsibly to prevent theft and under age sales. Many retailers work in the community in which they live – these resources will help them to take an active part in protecting their communities by making sure that knives don’t get into the wrong hands.”

All London retailers selling knives will be invited to sign up to the new scheme, with an emphasis on attracting smaller independent businesses to help them comply with the law. The RRA urges businesses and staff to:

LTS warns that, without new government funding, trading standards services do not have the capacity to enforce the new Offensive Weapons Act 2019 which deals with underage sales of corrosives and the banning the delivery of online purchased knives and corrosives to under 18s.

London Trading Standards’ Operations Director Stephen Knight said: “London Borough trading standards teams have been cut to the bone in the past decade and are extremely thinly spread dealing with criminal activity by London’s 500,000 businesses. The Offensive Weapons Act 2019 will require significant new funding for trading standards if its measures are to be meaningfully enforced when it becomes law in the coming months”.

Chief Executive at the Chartered Trading Standards Institute, Leon Livermore, said: “These figures show how important test purchases of knife sales by trading standards officers are. We fully support this new retailer agreement. It is an important weapon in keeping UK consumers safe. It’s key that trading standards services are funded enough to do this work.” 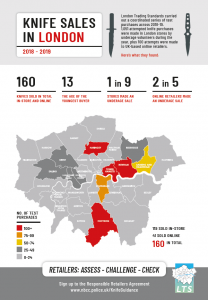 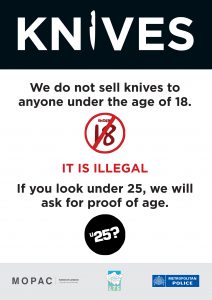